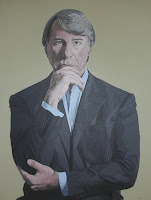 I'm proud to inform you that my lot at the auction went for £5750. Even though it didn't reach as much as in 2008, it was the 4th highest of 24 lots. All the money goes to the Prince's Trust, a chariry that helps disadvantaged young people into work.

Other lots included: A limited edition signed piece from Sir Peter Blake; a legendary Bass Guitar signed by Sting; a signed print from Sir Paul McCartney; a luxurious Private Villa for 24 un Sicily; a vogage on board Queen Elisabeth for two.

The Invest in Futures Gala Dinner, took place at the Natural History Museum. The evening started with a cocktail reception where I exhibited my paintings surrounded by fossils and a giant sloth squeleton thousands of years old. It was a really charming enviroment to be exhibiting at!

The annual dinner, which unites hedge fund leaders and financiers from around the world, raised more than £1 million for The Trust, the largest sum ever raised at the event since its launch in 2005.

Joan Collins, Dionne Warwick, Kate Aidie, Rod Stewart and Penny Lancaster joined city high-fliers to raise record funds for The Prince’s Trust, at one of the most important fundraisers in the calendar. Grammy award-winning legend, Dionne Warwick, performed at the fundraiser, which was hosted by Clive Anderson.